New Cost of Living Comparison data reveals exactly what prices people are paying across the UK, America and Australia and shows just how expensive Australia’s cost of living is. 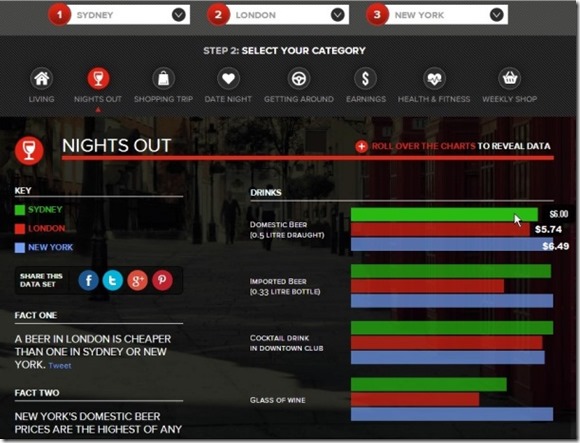 Whether it’s surfing the net, grabbing a bite out with friends after work or going to see the latest blockbuster movie, on average Australians are paying some of the highest prices in the world.

One of the standout differences was the cost of a pre-paid mobile phone tariff. Australians are paying on average nearly four times more for this than the US and nearly three times more than they are in the UK. When comparing the individual cities LA costs $0.11 per minute compared to Sydney, which is nearly 9 times more at $1.00 per minute.

Clothing prices also set an expensive trend in Australia with Aussies paying on average 57 per cent more for clothes and shoes than they are in the US or the UK. One particular price comparison that stood out from this was a pair of Nike trainers. In the US and UK these would sell for approximately $90 where as in Australia they would cost approximately $150, a staggering 60 per cent more. No wonder Aussies like to go online to stock up on their favorite wardrobe essentials.

An individual bottle of your favourite soft drink, like Coke or Pepsi, may not go down as smoothly knowing that it costs less than half price in some parts of the US than it does in Australia.

The comparison tool, which uses data collected primarily from Numbeo; the world’s largest database of user-contributed data, allows users to compare three cities across a number of key categories including their Weekly Shop, Living and Getting Around.

Aussies will be pleased to know that one of their beloved simple pleasures, coffee, was cheaper on average than the UK and the US.

List and updates Of the latest  Company Takeovers … END_OF_DOCUMENT_TOKEN_TO_BE_REPLACED

About - Australian Business Report and … END_OF_DOCUMENT_TOKEN_TO_BE_REPLACED